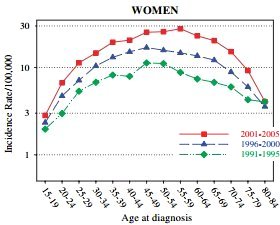 Background: The incidence of thyroid cancer (TC) has been increasing over the last 30 years in several countries, with some of the worldwide highest TC incidence rates (IRs) reported in Italy. The objectives of this study were to evaluate by histological subtypes the geographical heterogeneity of the incidence of TC in Italy and to analyze recent time trends for papillary thyroid carcinoma (PTC) in different cancer registries (CRs).

Methods: The study included cases of TC (<85 years of age) reported to 25 Italian CRs between 1991 and 2005. Age-standardized IRs were computed for all histological subtypes of TC according to CRs. Estimated annual percent change and joinpoint regression analysis were used for analysis of PTC.

Conclusions: The distribution of PTC does not lend support to a role of environmental radiation exposure due to the Chernobyl fallout, iodine deficiency, or (volcanic) soils. Between 1991 and 2005, wide geographic variations in the incidence of PTC and heterogeneous upward trends emerged, suggesting that the heterogeneity was a relatively recent phenomenon; this appeared to be mainly explained by variations, at a local level, in medical surveillance.